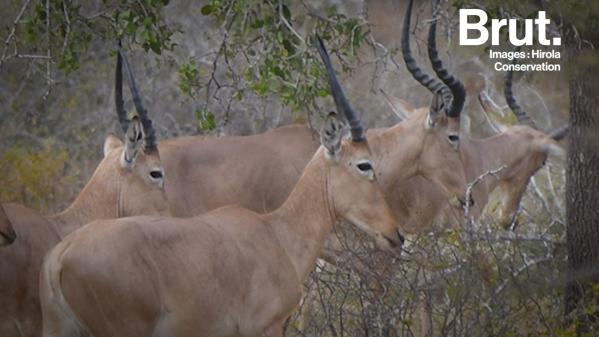 It is nicknamed the 4-eyed antelope … The reason? Its two preorbital glands resembling eyeballs. It is the hirola, an astonishing animal now on the list of the 100 most endangered species in the world and considered the antelope closest to extinction. Historically present over more than 38,000 km² between Kenya and Somalia, it only survives today over an area of ​​1,200 km².

The species has completely disappeared from Somalia and the number of individuals in Kenya has increased from 16,000 to 400 between 1979 and 2016. This spectacular collapse is largely due to the modification of its environment and in particular to the increase in cover tree which has doubled since 1985. If the multiplication of trees may seem like good news, it is not for hirola. These trees replace the grasslands essential to their food. This increase in plant cover is due to several factors: the intensification of periods of drought which weakens the herbaceous zones more than the savannah trees, the modification of livestock breeding methods and the virtual disappearance of elephants due to poaching.

The 5000 pachyderms formerly present in this region favored the maintenance of grazing areas by uprooting a large number of trees in their path. In an attempt to save this species, which is now on the verge of extinction, teams from the Hirola Conservation Program are working to restore habitat, fight against poaching of elephants and other wildlife in the region, and carry out missions research to better understand the needs of the species and carry out awareness-raising work with local populations.

According to the IUCN, if the hirola goes extinct, it would be the first extinction of a kind of mammal in mainland Africa in modern human history.